I am passionate about helping women achieve their breastfeeding goals, and helping them over-come difficulty during their journey. Everyone’s experience is very unique and reflects the vast diversity of both boobs and babies! I tend to find general knowledge of how the breast works is not well understood – not just by mothers, but even by health care professionals. I recently wrote an article for the “Australian Doctor” (a resource for GP’s) on the basics of breastfeeding, and thought a summary of this would be helpful for all breastfeeding mothers or mothers-to-be.

Anatomy and Physiology of the Lactating Breast

Surrounding the alveoli are muscle cells called myoepithelial cells. When these contract around the alveoli, it pushes the milk into the milk ducts and out of the nipple. This is called a let down. Let downs are triggered by the release of a hormone called oxytocin which is released by the brain. Oxytocin is our “love hormone”. It is triggered by suckling/stimulation of the nipple and thinking about the baby.[2]

During pregnancy, the breast undergoes growth to prepare for breastfeeding, under the influence of our hormones. Prolactin is our milk-making hormone. This continues to increase during our pregnancy, but we don’t make much milk until the placenta is delivered. This is because the placenta makes another hormone called progesterone, which stops the effect of prolactin. Our breasts can make colostrum during our pregnancy though.

Milk usually “comes in” between days 2-8. This is where the breasts start to make a much larger volume of milk, rather than just the colostrum. It is the drop in progesterone after delivery of the placenta that triggers this change. From there, milk production switches to “supply and demand” (autocrine control): the more milk that is removed from the breast, the more milk the breast will make. And conversely, when breasts are poorly emptied, this will reduce milk production.

Below is an image showing the anatomy of the lactating breasts – the lobules where milk is made and stored, and the ducts bringing the milk from the lobules to the nipple. 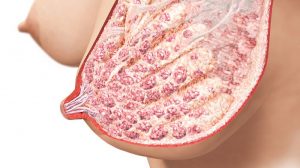 Breast milk composition is uniquely tailored to the individual baby and varies throughout a feed, the day, and the spectrum of the feeding journey. In summary, it contains: fats (accounting for around half of its calories); a huge array of proteins (to help absorb nutrients and assist the immune system); antibodies (secretory IgA is particularly important to fight a wide range of viruses and bacteria while the baby’s own immune system is maturing); carbohydrates (mostly lactose); and human milk oligosaccharides (prebiotics that prevent gut and respiratory illnesses) [3]. The idea of fore-milk and hind-milk is now out-dated; rather the fat content is higher when the breast is emptier; which is not just towards the end of a feed, but also during the later part of the day.[4] There is always fat in milk, even at the start of the feed.

The 24-hour volume of milk intake is quite stable from the age of 1-6 months, although this volume varies significantly between individual babies. The average is around 800 mls in 24 hours, but can range from 480 ml to over 1.3 litres.[5] Milk volume production appears to mostly be driven by the baby. Ultrasound studies have shown no link between the amount of glandular tissue and milk production, or storage capacity.[6]

The baby attaches to the breast, creating a seal with its face around the nipple, areola and surrounding breast tissue. The lips are not so important for breastfeeding. Ultrasound and MRI studies of breastfeeding pairs have shown that the lips usually sit in a “neutral” position[7] (highlighting that the idea of the lips needing to flange is out-dated; as is the need for the “Special K” lips). The baby’s lower face against the breast generates a baseline vacuum. By dropping its jaw and tongue as one unit, it increases the vacuum and milk flows into the oral cavity, with the help of a let down. Positioning the baby with a deep face-breast bury, allows continued drawing-up of the breast tissue into the baby’s mouth.  This, and ensuring the elimination of any breast tissue drag by placing the face symmetrically around the nipple/areola, will lead to effective milk removal. Unfortunately, the out-dated “stripping model” of milk removal (where the tongue lifts up and massages the breast using a peristaltic action), is still widely taught. Through ultrasound studies, it is clear the milk flows when the jaw and tongue are down, not up. The anterior tongue only needs to move 3 mm for effective milk removal.[8]

Below is a video of the infant suck/swallow cycle with an ultrasound. They have over-laid images of the anatomy to help show what is happening.

Putting This All Together

The first few days are essential for setting up a good breastfeeding journey. The hormone prolactin is released in response to suckling, and prolactin is what starts milk production[9]. For this reason, it is really important the newborn is fed often (ideally 3 hourly or more often). This will also protect against low blood sugar, excessive early weight loss and jaundice in the baby. Frequent feeding will also bring in mum’s milk more quickly.

Every woman will have different volumes of storage capacity; rates of milk production; sensitivity to a full breast; and times for milk let down to take effect. However, successful breastfeeding and milk production is mostly dependent on the baby suckling well and often and regulated by the baby’s appetite.[10] There cannot be a “one size fits all approach”. It is normal for a baby to feed between 8-12 times in 24 hours. Night feeding is normal and contributes to the 24-hour calorie need.[11] Each baby will feed for a unique length of time, which gets shorter as they get older. Some mothers will only need to offer one breast per feed whereas others will always need to offer both and most will have a mixed picture (some feeds the baby will only take one breast, and other feeds the baby will need both).[12]  To ensure appropriate ongoing milk production, it is essential the mother cues into her baby’s sucks and swallows. A baby sucking but not swallowing is not transferring milk. If she has a generous milk supply, advise the mother to really soften one breast before offering the second. If she has a lower supply, offering 4-6 breasts in a feed may be more appropriate. Switch to the other side when the baby is not swallowing often, or is sleepy at the breast. There is no benefit in extending the time between feeds as this can be detrimental to some breastfeeding pairs. Instead, mothers can offer the breast frequently and flexibly whenever the baby is cueing for it, rather than watching the clock. You cannot overfeed a breast fed baby. In essence, there is no “normal” pattern to breastfeeding as each mother-baby pair is so unique.

Adelaide Mums and Babies Clinic acknowledge the traditional owners of this land and pay our respects to their elders both past, present and emerging. We acknowledge and uphold their continuing relationship to this land, the land of the Kaurna and Peramangk people.